And yes, you can just call it “kink.” Kinky people do. Just don’t be a judgmental prick about it.
For a good summary of the history, see CARAS research

7. “All kinky people wear leather. And are gay.”

Nowadays, all kinksters have the same flag, but the not-gay male kinky people are a lot less likely to wear leather.

“No flag, no subculture–that’s the rule that I just made up!” ~with apologies to Eddie Izzard 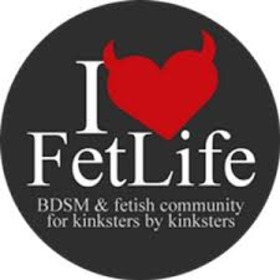 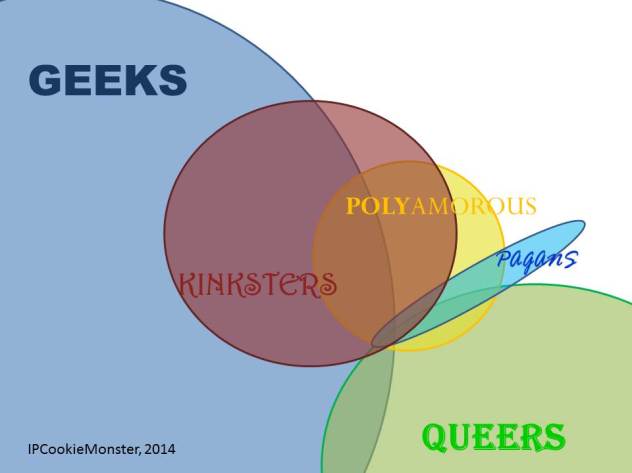 I created this diagram to illustrate my point. 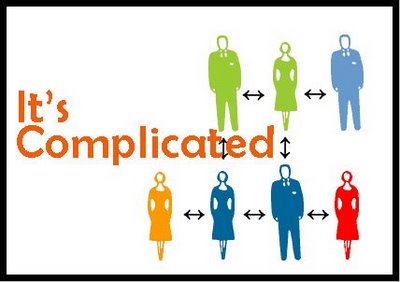 I can’t be wittier than Oscar Wilde.

5. “Kinksters and swingers are all part of the same subculture”
Au contraire, there is actually a longstanding subcultural war between kinksters and swingers, even though—nay, perhaps because—they often have their events in the same venues on alternating nights. The hostility is so common that the primary group for swingers on the kinky social networking website FetLife is defensively named, “’Swingers‘ is not a dirty word!”

#3 google image pic for “Swinger Party.” Real swingers tend to be a lot older than this, but just as white, and just as naked.

To be clear, kinksters like to play with power and pain; swingers like to have sex with lots of people. These desires occasionally overlap, but mostly don’t.

Many kink gatherings forbid sex; sex is what happens at swinger parties. Most kink events enforce strict rules about consensual touching; most swinger events operate with a “touch unless swatted” attitude.  Many kink events are extremely Queer-friendly (despite a decidedly heterosexual male/bisexual female bias); most swinger events strongly discourage two men from staring at each other’s asses, let alone fucking.

4. “All kinksters live in 24/7 Dominant/submissive relationships and do crazy shit like play with enemas and let people pee on them.”
Whoa, there, friend!  Um, some of us do… but actually, the vast majority of us don’t. Don’t gay guys dress like this all the time?

Just like the gay guys who make the news are often wearing rainbow tutus with sparkly underwear, the people who are conspicuous among kinky folk tend to live at the extremes—but neither is really representative of “most gay guys” or “most kinksters.”  Most kinky folks aren’t in 24/7 relationships, have never signed a contract that lets someone else “own” them, and wouldn’t let someone else pee on them. Lots of kinky people get collared or collar someone else. Most of us don’t.

Handcuffs: so kinky you can buy them at the mall at Spencer’s, along with a Superman wallet.

3. “All kinky people were abused as children, or have been raped or molested.”
This one just won’t go away: the great kinky romantic comedy Secretary actually opens with the main character being released from a mental hospital; meanwhile Christian Grey in 50 Shades of Grey has some sort of tortured past of non-consent. Just like psychologists used to try to expend a lot of energy and imagination trying to figure out the experiences in someone’s past that “makes them gay,” the culture still tends to assume that some experience “makes them kinky.” 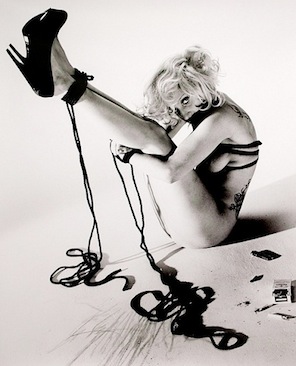 Dude, Mama Monster (Lady Gaga) said she was Born This Way. Why would she lie?

Despite the persistent idea of kinksters with haunted pasts of abuse and molestation, in fact, psychological research has found over and over again that kinksters are pretty damned normal and as likely to have been raped or abused as anyone else.  A lot of kinky people say they were just born this way, with some suggesting that “kinky” is a basic sexual orientation the same way “straight” or “gay” is.

References: Meeker  Connolly 2008 Wismeijer & van Assen 2013 (the Netherlands)  Richters et al. 2008 (Australia)
2. “All Doms are men” OR “All Doms are women”
Both of these misconceptions manage to float around simultaneously.  The idea that all Doms are women is fueled by the fact that most professional dominatrixes are women.

The idea that all Doms are men is driven by sexist assumptions about women all being submissive and having a deep-seated biological urge to spread their legs whenever anyone with a penis tells them to.

I admit I find this attitude pretty funny myself, but it’s kinda popular.

This looks pretty fucking kinky to me. That’s some serious bondage.

In case you were wondering, people don’t usually fuck when they’re tied up like this.

Kink, religion, or both? If the people weren’t white, would your answer change?

Please note: none of these photos except the diagram in the middle are original to me. All are live-linked back to their original sources. Enjoy!

By The Slut in Articles & Opinions on February 20, 2015.
← Men’s Orgasms: A Woman’s Perspective Great Advice for Concerned Parents →